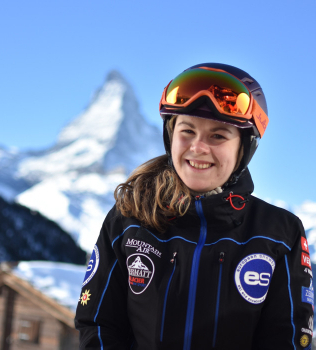 0
2
9 August 2018
Instructor in Zermatt
Beth is an ISIA qualified instructor heading into her fourth year in Zermatt. She loves teaching people of all ages and abilities, in particular the little penguin groups (3-6 year olds) for [...] 0
0
9 August 2018
Instructor in Zermatt
Ben Davies, the school’s Director in Zermatt, tries to spend as much time on the snow, skiing as much of the mountain as possible. He loves to keep active and has been a keen sportsman his [...] 0
3
18 January 2018
Instructor in Zermatt
Neill is an encouraging skier who loves being part of the mini victories his guests achieve when skiing with him. From conquering the famous snow plough on their own to a top to bottom mogul run. [...] 0
0
18 January 2018
Instructor in Zermatt
Max is one of our few Swedish instructors that we have in Zermatt. You will find him all over the mountain along the winter and spring but mostly in the snowpark when the snow conditions call for [...] Get the Low-down on St. Moritz

0
0
9 October 2017
ES Blog
St.Moritz has earned a reputation as one of the most exclusive ski resorts in Switzerland, but what’s it got that other Swiss resorts don’t? What exactly puts it a cut above? We [...] 0
0
21 March 2015
ES Blog, Good Advice for skiers
What is Good Skiing? Part 1 covered the basics of technique: the relationship between balancing over the middle of the skis and your ability to efficiently turn the legs. In Part 2, I want to [...] The 4 Vallées Tour – a magical day!

0
0
14 March 2015
ES Blog
The 4 Vallées is enormous. 412km of marked piste supports more freeride terrain than you can shake a ski pole at. Unfortunately, many of Verbier’s visitors never get to see the whole ski area [...] 1
0
11 November 2014
Instructor in Zermatt
This is John’s ninth season in Zermatt. He’s been an active person from a young age, enjoying most sports but particularly skiing and football. This led to him becoming a ski instructor and [...]