What Can You Expect from a Telemark Ski Lesson?

We’re back to ‘free the heel, free the mind’ with a firsthand report from a telemark ski lesson.

If you haven’t already read our blogs about telemark ski lessons and the history of telemarking by resident ES telemark guru, Tug Wilson, I highly suggest you do so. I fact, it was Tug’s first blog (that he one day sent to me completely out of the blue) that inspired me to take a telemark ski lesson in the first place.

When it comes to snow sports I’m the first to admit I can be pretty lazy at trying new things. Despite every year saying I’m going to spend a day on a snowboard or learning to telemark, sorting out all the gear and finding other willing participants is an organisational nightmare that’s beyond my motivational skillset. Getting used to the equipment….

So, when Tug offered me a telemark ski lesson one morning, how could I refuse? Willing participants: check. Telemark skis and boots: check (easy to rent from any good rental shop, I went for Mountain Air in Verbier). Now I had no excuse.

I’d always expected my first day on telemark skis to be spent on my face (because of the free heel format), Tug kindly informed me that it’s actually quite hard to fall on your face on telemark skis. I also expected to spend the entire time on the beginner slopes perfecting my lunge turns, however, we were straight on the gondola and heading over to some mellow blue and red runs. Tug explained that because I could already ski, telemarking wouldn’t be too much of a jump. And, he added, if I ever felt like I was in real trouble I could always put my heels down and revert to the trusty Alpine ski technique. However, I’m not one to back down from a challenge, so after a brief explanation of the equipment and what to do, I tried to stay in telemark pose as much as possible. And while it did feel a bit strange at first (‘long and low’ is Tug’s telemark mantra), I managed multiple laps of some of Verbier’s easier pistes, and even the home run back down to town without too many mishaps. It even started to feel quite natural after a while. And, bonus: it wasn’t quite as hard on the thighs as I’d expected. So, what can you expect the first time you try telemarking?

All in all, if you’re a confident skier, taking a day out to try telemarking is a great idea, especially if you feel like you’ve hit a bit of a plateau with your skiing. After a morning of telemarking I felt refreshed on my Alpine skis and energised at having tried my hand at a new skill. And (cheesy line alert), I felt like I’d well and truly freed my heel and freed my mind.

If you’d like to give telemarking a try, get in touch with the ES office. We’re always happy to organise you a lesson and raise the profile of this awesome sport! Tug has the BASI level 3 ISIA telemark qualification, which is the highest tele qualification you can get in the UK system and I can confidently say he’s a great teacher. ES also offer telemark lessons in our other resorts, Nendaz, Zermatt, Chamonix and St. Moritz. 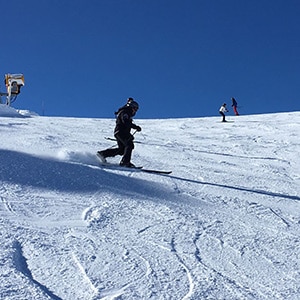 Article Name
What Can You Expect from a Telemark Ski Lesson?
Description
ES ski instructor, Chloe Hardy, tries her hand (or should we say, feet) at the noble art of telemark skiing with a lesson from ES tele guru, Tug Wilson.
Author
Chloe Hardy
European Snowsport