The Ski and Scuba Adventures of ES Instructor Matteo Spinelli

Home / ES Blog / The Ski and Scuba Adventures of ES Instructor Matteo Spinelli
30 May 2018
ES Blog, V instructor articles, What We do in he Summer
0
0

If you’ve been skiing with ES before, you may have skied with Matteo Spinelli and seen first-hand just how much he loves the snow and being in the mountains. Originally from Italy, Matteo’s other love is the sea; he spends his summers teaching scuba diving on the Madagascan island of Nosy Be, with its pristine white beaches, blue waters and wild terrain . Sounds pretty amazing, right? We caught up with him to find out all about it.

“At the end of the winter I go home to my mum, just to say hi and bye. Just to change my wardrobe. During the summer I live on Nosy Be, an island in northern Madagascar, where I’m a scuba diving instructor. This is my summer passion. I spend all day, every day in the middle of the Indian Ocean guiding and teaching scuba divers, sharing my passion for the underwater world.

I started scuba diving ten years ago and have worked for nine years as a scuba diving instructor. I think I was born to be a scuba diver; I learned in Rapallo on the Italian coast (30km south of Genoa), where I worked for six summers before going to Madagascar. My first time in Madagascar was in 2016; I went there based on word of mouth as I have many friends and colleagues around the world doing the same thing. One of the best matches in the world is to be a ski instructor during the winter and scuba instructor during the summer. I got into scuba diving at a strange moment in my life, around the end of my university course and the end of the journey to become an Italian ski instructor. Scuba is my uncle’s love, I decided to try to follow his passion and I fell in love with it immediately. I took my first scuba step in a swimming pool and after a couple of weeks I went diving in Sharm el Sheikh in Egypt… and that’s when realised I’d discovered my second passion. The summer after that I spent training to get all the licenses and the instructor license. 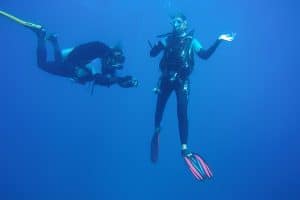 I love living on Nosy Be. During the summer the weather is amazing, it’s 30 degrees and sunny all day, every day. During my days off I love to do “extreme” diving and I go on excursions (walking or riding quad bikes) to discover everything I can in Nosy Be. My favourite thing about the island isn’t a specific thing but the general lifestyle and culture; the locals are amazing, they have pure values and they have huge hearts. It’s amazing when they invite you to share your free time with them. It’s wonderful to learn about how they live. I love to be deep in unspoiled, pristine nature, and Madagascar is one of the most undeveloped lands. For me, I get the same feeling from being on top of a mountain as I do being underwater. I love to have adventures in to the wild world. I love to teach and share my passions, scuba and ski.”

Matteo works at Andilana Beach Diving School on the beautiful Madagascan Island of Nose Be. That’s where you’ll find him in the summer; in the winter you’ll find him teaching skiing at ES in Verbier. Get in touch if you’d like to book a lesson with him!